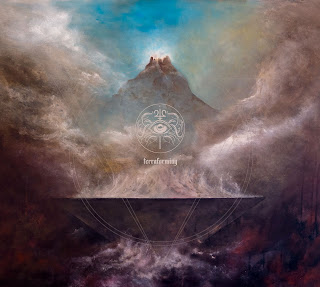 Jupiterian made quite an impression on us back in 2015 with their first LP, Aphotic, so it's with great delight that I dug into this, their latest album, and found their doom just as potent as before, but with an even more expansive scope to the music and production.   The songs sound big, and not just because most of them are about seven minutes long; resonance, timbre, and reverb combine to rattle your teeth while still coming out of your speakers with deceptive smoothness, while the riffs and roamings come down with all the force of mausoleum doors into rain-soaked earth.
Little touches here and there, like the ringing of distant bells or crashes of muffled thunder, help build a more powerful atmosphere, and give a sense of the band trying to make the album a full experience, something more than just a series of songs.  There's enough fury behind the vocals and lead shreddings to suggest black, death, or sludge influence, but doom pretty handily holds sway over all of it.  From the forceful rhythms to the seeping anguish, Terraforming shows the band with incredible command over their material, high skill at building moods, and a way with building understated melodies that can rear up and swallow you whole.  Goddamn good stuff, don't miss out on this if doom is a musical flavor you even slightly enjoy.
~ Gabriel