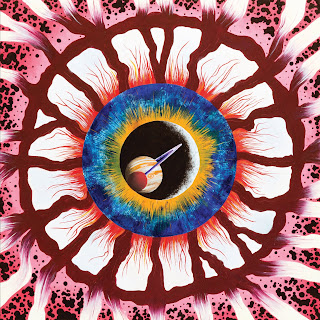 Over the course of the two songs on this EP, the LA-based outfit of Ancient Altar unpack about 24 minutes of stern doom metal, building from firm bass and drum foundations up through growls, toothy guitar-work, and clear but imposing singing. The first half, “Cosmic Purge”, works up to a powerful momentum, with a few breaks scattered in among the otherwise unrelentingly heavy roll-along. There's tunefulness threaded in, though the aggressive weightiness stays at the fore-front, and it carries itself well for its ~11-minute size. “Foie Gras”, the second and longer track, picks up from it with a little more emphasis on the riffs, and a little more speed to its crashing impacts. It's a nice twist from the atmosphere set by the first, and its faint touches of psychedelic exoticism on the guitar's solos lend things an appreciable expansiveness. Between the two tracks, it's a solid and enjoyable release, one which bodes well for the subsequent album on their own Transcendental Void Records label. Hopefully that'll arrive before too long, but in the meantime, get yourself acquainted well with this EP, and soak up the menace.
~ Gabriel