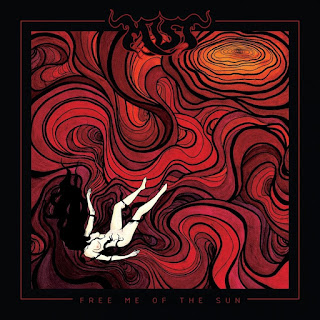 We first heard the Slovenian band of Mist back in 2013, with their succinctly-titled Demo. Two EPs and five years later, the group has their first full album ready to share with the world, and in its ten tracks, the quintet show how they've developed their style over half a decade. Big sound, bold riffs, and a solemn atmosphere typify the album, with assertive guitar-lines and rich vocals providing the main guidance to the melodies. There's very much a 'retro doom' vibe to the songs, with traces of the more somber giants, like Candlemass and Saint Vitus, evident in the deliberation shaping mood and bass shading.
As such, while the usual aggression common to metal does show up regularly, its in the music's slower and more thoughtful moments that it really shines (“December” being a prime example). The heaviness is more of a means to an end than the be-all, end-all of something like Ommadon, but it's also deployed with effective dedication and thoughtfulness, wrapping around the core melodies with impressive bonding for what it is. A little more resonance or up-mixing of the bass would have been nice, but considering the need to balance five members' contributions, the end result is understandable. In any event, it's a pleasure to see this group finally put out an LP, and for something five years in the making, it certainly doesn't disappoint.
~ Gabriel