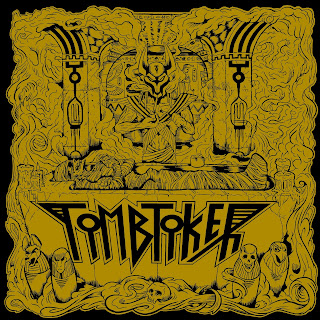 Coming at us out of Baltimore, Maryland, the five-piece band of Tombtoker bring their debut EP out on the heels of their demo, which released about half a year ago. Infusing the standard stoner doom metal with a sludgy bit of punk energy and antagonism, the group merges crunchy riffs with sharp beats while keeping a swampy vibe active underneath. Over the course of the EP's ~20-minute run, Tombtoker capably demonstrate their facility with cranking out hard beaters alongside more withdrawn doom indulgences, and the band operates with such tightness to their playing that it's hard at times to pick out the individual guitars from their twining grooves. A solid first full release, and those who've been looking for stoner metal with a harder edge would do well to check these guys out.
~ Gabriel