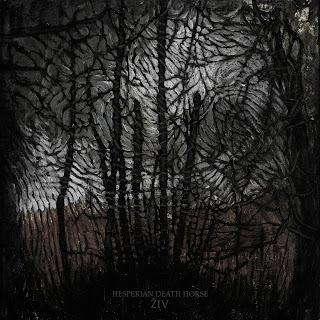 When we last heard from the Croatian group of Hesperian Death Horse, the year was 2014, and they'd not only done a concept split with fellow Croats Hazarder (on the theme of Nikola Tesla), but also released their first full-length album. Now that they've returned, they've revealed that said first album (Mrtav) was actually the first part of a concept album trilogy, starting with death and ending with birth. Živ is the step between those extremes, with the title translating to 'life,' and featuring (like Mrtav) four songs, each bearing a subtitle. Živ is also a bit shorter than that first album, but considering that relative durations of life and death, that seems appropriate.
With a deep and brooding atmosphere combining doom's weight with blackened virulence, the music grows in creeping fashion, moving through passages of slow-moving heaviness and faster aggression (kind of like life, you may be thinking). The synthesis of the two produces some great tension and stirring melodic developments, and the sections which cycle a riff while gradually escalating the harshness really bring the emotional thrust to bear with finesse. HDH find an impressive amount of range and material to be drawn from the interaction of the two styles, and while the length of the album makes it prime for vinyl issuing (fingers crossed), it's also likely to leave you hungry for more. Of course, that's much preferable to having too much piled on, so cheers to the Croatian crew for the excellent album, and here's hoping it's not quite so long until the last piece of the trilogy is set upon the world.
~ Gabriel