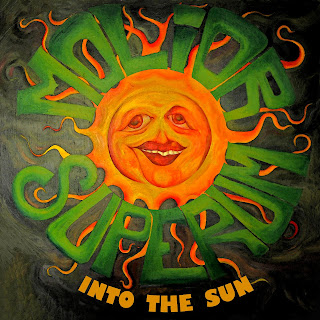 You can always rely on the good ol' Swedes to break out the old school influenced tunes when they're most needed. It's been a while since had a good classic rock sounding band appear in our inbox. We had planned to cover Graveyard's Lights Out, but between everyone and their mother dropping us tunes, the loss of writers and the fact that there's a load of outside parties trying to take us down you're just gonna have to settle with Molior Superum. Not a bad trade off if I'm totally honest, especially if like me you were born about 30 years too late and long for a time where gig tickets cost just a couple of bucks, bands had their own planes and you only had a choice between vinyl or 8 track. Well dig out your bong and strap yourself in because if you hadn't assumed by the cover art you're in for a good old fashioned bass heavy psych session.
Although the opening couple of tracks are sang in english the guys do revert back to their native tongue for the remaining half of the album. But don't let that put you off, what you may not understand wont by any means deteriorate the rest of the track(s). With the aforementioned bass heavy element throughout, coupled with an array of upbeat riffs the end result reminds me of the early years of Clutch. The unique style of rock that plays on all the best parts of stoner, southern and desert rock all rolled into one. It's pretty killer and whats more impressive is that the guys are able to keep it up for the entirety. Admittedly I'm not a huge fan of the instrumental prog like psych towards the end, maybe its a result of growing up on too much Yes or Genesis, but credit where credit's due, it's done bloody well! Few bands these days can truly pull off an organ, but Molior Superum have successfully made it into that minority.
~ Jay