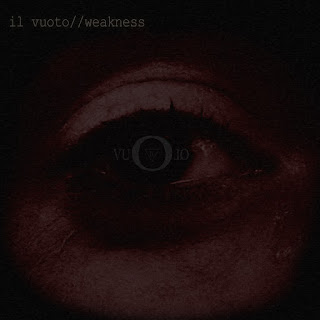 After a couple of demos, the Italian one-man funeral doom band of Il Vuoto has released its first full-length, consisting of seven sorrowful tracks formed from regally expansive sonic space, wailing guitar-work, grave-born vocals, and more.  Elements of decay and grandeur like a low-mixed piano, distant owls, and the sounds of rainfall are worked in to solid effect, and the track titles, such as "And Night Devours Me" and "Through Mirrors I Saw the Ghost of Me", snap right into place with the music's atmosphere.
The notes which came with this release mentioned a Sunn O)))-inspired use of drone on the demos, and while most of Weakness has a more traditional funeral doom approach, that noisier side does come into play, most notably in "The Harvest".  There's also some relatively calm reflectiveness, as in "Sea of Emptiness", which builds around an acoustic riff and the sounds of breaking waves for a bit of peace before returning to the howls of betrayal.
It's a very well-assembled album, and one of those cases in which being a one-man operation really seems to have allowed the music to be expressed exactly as intended, without external suggestions disrupting the outpouring.  Fans of moody and majestic doom should find time to give this a listen.  Great work and arrangement from Il Vuoto, and an excellent debut LP.
~ Gabriel