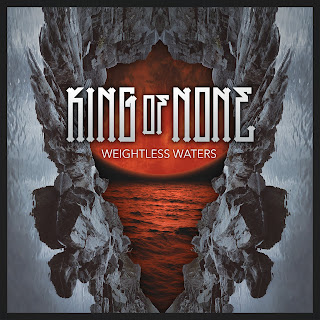 Popping up with their third EP since debuting in 2015 with their self-titled one, the Finnish group King of None make their run this time with six tracks of psych-washed hard rock. Kicking off with “Words of Mine”, they brandish a solid noodly guitar groove that slips right into rougher tones, and while the yelling is kind of quiet in the mix, it still comes off as some of the rowdiest material in the line-up, and makes for a very enticing lead into the rest of the music.
“Worlds Collide” turns up the psychedelic influence as a contrast, but brings the hard rock right back up in force as soon as a bridge leads to that territory, and it stays in that flavor for most of its go. With a very solid stretch of shredding, the band gets blood pumping hard in the lead-up to the next track, the intriguingly-titled “Frog Palace”. Here, things slow back down for a heavy cruiser that makes for a fun midpoint to the EP (though where the frogs come in is still a mystery to me).
With the slow-grooving “Desolator”, the band provides a strong demonstration of their skill at weaving appreciable heaviness into hooky melodies, and their willingness to explore tangents when the path of the song becomes more interesting than just rolling along with the grooves. It shows a band that knows the appeal of bassy fuzz, but also wants to savor more nuanced song-writing. “Starbirling” follows after that, and as the band dives more fully into the retro hard rock vibes, there's a sense of them loosening up even more, making the riffs feel even more animated and energized. That easy-going cool sticks around pretty reliably from there, with final tune “Yellow Snake King” bringing in some more desert rock flavor, as the name somewhat suggests. At just over seven minutes, it's also the longest track on the EP, and the band makes use of that expanded space to really chew on the riffs, stretching them out into delightfully free-rolling head-banging inducements. Plenty to enjoy here, so check it out if you've been craving some heavy rock with substance to it.
~ Gabriel