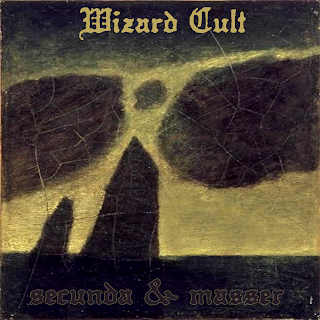 About four years ago, I had the pleasure of encountering the first album from Wizard Cult. It was heavy, it used psychedelic touches in interesting ways, and it had one of the most distinctive physical releases I've encountered (all the cassette copies were hand-collaged, with mine ending up wrapped in carefully-picked and pasted scraps of comic strips). For something just under half an hour in material, it made a deep impact, thanks in no small part to the sense of how much the band-members cared about bringing their music to life in more than just the usual ways.
This year, Wizard Cult are putting out their second release, which unfortunately looks to be their last, going by the digital liner notes (“From deep within the lost libraries of Arkngthand this album emerges, documenting the last efforts of a long lost cult of sorcerous power.”) So it was with a mix of anticipation and trepidation that I threw it on to hear; while the download copy has the album in unbroken A-side/B-side runs as an option, I'm going with the split version for ease of identifying specific sections.
Leading with the eleven-minute “The Cave”, the garage-like quality of the collected recordings is immediately evident, with a buzzy fuzz swaddling everything from the opening sample on through to the shaking bass and craggy crashes on the drum-kit. Cutting through most of the roughness, though, is the power of the grooves into which the band taps, with the blown-out vibes kind of suiting the intensity with which they play. As “The Cave” winds down from its trip, with screams and some cymbal flourish, it flows right on into half of the album's title, “Secunda”. Here, the bass throws down even harder, and with all the pieces established, it really starts to gel. The sludgy yells, the almost funeral doom-paced percussion, the deeply heavy psych growls of the guitar, and the overpowering bass rumble grind and slam together, and while it does feel kind of like you're sitting in on a rehearsal session, there's enough raw vitality vibrating through it all to make that a pleasing experience.
“Goat Demoness” drops into action with another cinema-sourced sample, and it's off into more dizzily-cranked heaviness, this time picking up the pace into a bleary-eyed late-night-highway burner. The hits come hard and strong, the menace is palpable, and it finishes off with the ringing of a cowbell. So, pretty great, obviously.
After a short lull, the fuzz returns with still another obscured sample to kick “The Fourth Pact” into action, bringing with it a slightly cleaner tone (at least to start), but even more anger to even that out. The plaintive screech of the strained guitar strings, along with the punch of the focused bass-line and plenty of squealing signal interference brings this one the furthest into sludge territory, and is sure to raise your heart-rate (or at least your blood pressure). With the finisher, “Masser”, Wizard Cult slide between the two tracks on a sled of disintegrating amp feedback, savoring it and letting exploration of the abstract run-off make up the majority of the song.
As an exit album, it's one which certainly plays on its own terms. It also presents the band, warts and all, high on the spirit of making their music their way, something which feels all too rare these days, and especially in the often over-produced realm of doom. Whether you picked up Wizard Cult's first album back in the day, or this is your first time hearing of them, I strongly recommend you spend your time to listen to this one (and then go back and check out the other one, either way, of course). Sad as I am to learn that this band has no plans to make further music, I'm also quite glad that they're going out on such an honest and powerful note.
~ Gabriel