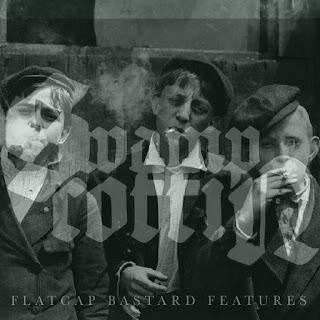 Coming to us from the Rotherham region of England, this is the debut EP from the three-piece of Swamp Coffin, set for release on August 23rd. Featuring four songs of increasing length, the band leads with “Blood in the Water”, a pull from their debut single Hey Ho, Stolen Logo, released at the start of last year. The six-minute song opens with a yowl of sustained feedback, bass gradually asserting itself until the guitar lands and sets the main groove. The drumming is generally spacy, but impactful, and the low-pitched growls of the vocals do a lot to build the sludge feel in the presence of the mostly clean-toned guitar. A chuggy breakdown pulls things into swampier territory, and SC maintain that trajectory through to the song's stripped-down end.
With follow-up “Annihulus”, some death metal flavor bleeds in, and the activity of the drumming gets a shot in the arm, throwing in some tasty fills wherever they can fit. The guitar and vocals feel more closely aligned here as well, and the instrumental stretches build some great moodiness out of the stark arrangements. The central riff gets some nice treatment, building in intensity until the last crash, whereupon “Black Shirt, Blacker Sabbath” takes over with a suitably stony groove. The dirty vocals and clean guitar push further apart here, but not enough to really throw things askew, and towards the end of the song's nine-minute run, there's some quite fun soloing action to savor, along with some cool crunch punctuation.
The eleven-minute-plus “Last of the Summer Slime” rounds out the EP, with its slow-burning sludge slog pulling in features from the preceding tracks. The chuggy breaks are there, along with lengthy instrumental measures, the death metal latherings, and craggily catchy bass-lines. There's some particularly effective resonance effects on the vocals at times, which lends things a subterranean feel, as does the gradual sinking of tempo and pitch towards the song's end. All together, it makes for a strong opening salvo from the band, and one which should turn some ears their way. Look for it to drop next month, and be sure to give it a listen once it does.
~ Gabriel