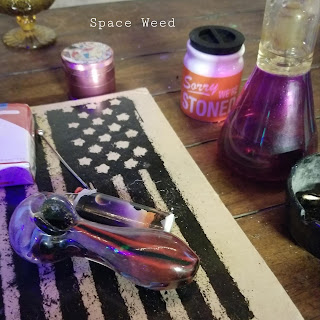 Hailing from the metal-storied region of Florida, this group's debut demo runs quick but effectively, with three tracks coming together at a little under a quarter-hour of music; given their proud theming, and the title of the last track, a quarter seems just right. With a title and cover art suggesting that they're fond followers of record label The Company, and their respective stable of artists, the demo cranks up to a ripping start with “Muskrat”, a track which practically throbs with bass reverb over the percussion. Their Bandcamp citing of Melvins, Electric Wizard, EHG, and Weedeater as influences feels honest enough, as the track follows one big main riff through its turns, letting the tone and vibes set the flow.

Production is rough, as you might expect from a demo, sounding authentically garage-y and raw, but as they follow that intro up with “Laser Rust Animation” the tone and clarity pep up considerably, with a snarly guitar line balancing out the broad-waved bass fuzz, the drums kicking up the tempo, and crashing cymbals spiking through the rumble. Some chunky breakdowns show an instrumental sense of humor with the push and retraction of the chords, while a slowed-down nod to Slayer's “Raining Blood” gives a brush of menace to the affair. Throughout, they show chops with pulling listeners into headbang mode, and while the playing threatens to tip over in a couple spots, they keep it just this side of upright.

Lastly, “Quarter Pounder” slows things back down, while keeping most of the energy of the preceding track intact. It's a bit sludgy, a bit doomy, but then their sample kicks in (and if you're not grinning upon hearing it, you need to brush up on your cinema classics), and the grooves take over indiscriminately. Altogether, a promising taste of things to come from this crew, with a nice dose of the fun we could use to recover from 2020.