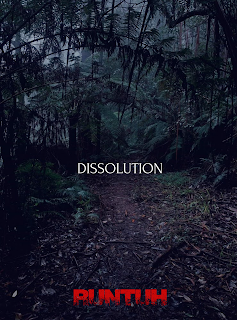 From our friends in StoneDulu Productions (home of Ksyatriya and Mind Reader) comes this debut album from a new project of theirs, the duo of Runtuh. With StoneDulu stalwart Trishay J. Trada on guitars and vocals, and Shahab Faisal on the drums, the two have tackled not just a concept album for their first release, but one which is formed as a single piece split into quarters.

The first of those, “Dissolution I – Alienation”, comes into being with some echoing strums of the guitar, soon shaped into chords and overlaid tones, though the pacing is kept slow and steady for a good while. As the drums roll in, along with some light cymbal work, the song soon shifts into full heavy gear, amping up its volume, layers, and intensity. Clean and rough vocals both get put to use in the building of the song's structure, putting the harmony and dissonance to work not just there, but in the rumble of amp fuzz and the harmonics as well. Hard beats from the drums go right up against the shredding guitar, getting things wild just by the midpoint (did I mention that the opening track is 20 minutes long?).

“Dissolution II – Transformation” brings things back down from that rowdy release, spending a couple of minutes on somber, clearly-voiced grief in the lyrics, while the instruments are pared down to match. The downcast mood is maintained through the song, though the bass and reverb focus return, and it stands strong as perhaps the most 'single-like' track on the album. “Dissolutions III – Revolution” opens with an audio sample from the TV series Sacred Games, before launching into a mournful drift on heavy doom pulses. As “Dissolution IV – Reprise (Unplugged)” comes around, the allegedly acoustic nature of the track does nothing to diminish its assertive gloom, with drummer and guitarist taking a meditative route to the finish.

The album is impressive, and consistently enjoyable, in that special sort of enjoyment earnest doom metal has. The jumbo-sized songs are used to keep growing and exploring the songs, and never seem to find the band caught in a non-purposeful retread. As one of the numerous projects TJT has his hand in, it's a mystery when we'll see the next release from this group, but this first release has more than enough meat on its bones to keep listeners occupied until part two rolls around.