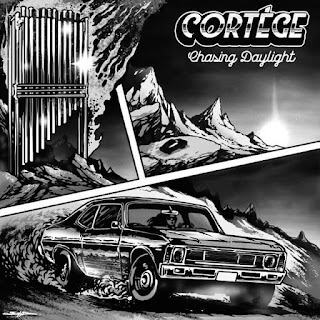 Having been around for about half a decade, the Austin-based duo of Cortége have put out a good half-dozen releases. With the sci-fi flavor of their presentation, and the doomed Western vibe to the music, it's tempting to compare them to the KC-based Merlin, of Christ Killer fame. But with this new two-track EP, coming together at just over a quarter of an hour, the band clearly shows their own distinctively Texas-sun-scorched character, with morbidity and melancholy never entirely deprived of stylish swagger.

Starting off with some tone-setting engine cranking and radio-tuning (including reports of a Texas-sized meteor), Cortége then slam into a huge and moody funeral stomp, shift gears into a dirge-like gloom, and rumbles on from there. Despite the rowdiness of the opening, a considerable part of the song is focused on drifting tones and slow riff grooving, simply relishing the details of the instrumental swamp they're exploring. It's like a mix of the classic Italian film music for low-budget but high-ambition flicks in the western and horror genres, fused around dramatic and goosebump-raising foci.

The break into the second half squeals through on rough tires, but carries listeners smoothly into deeper and darker audio territory, somehow almost somber in its bar-twang guitar and boot-step percussion. As much as it tends to hang onto one riff for a while, the musicians coax an amazing amount of nuanced characterization from the wide-spaced clangs and chords. It helps that they're willing to experiment with instruments, bringing keyboards and bells to prominence alongside the usual doom metal bass/drums/guitar. All together, it's a very impressive EP, and a concise, compelling argument for the band's skills across an open range. If you haven't checked the band out before, this makes for an excellent intro; and if you have, it's a welcome reminder of just how damn good they are.