And From The Ashes... 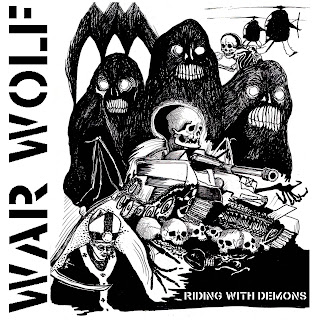 I for one was pretty gutted when earlier in the year Ant dropped me a line to tell me the mighty Dopefight were breaking up. But fortunately for us Paul, Ant and fellow buddy Oli already had their contingency plan in motion, and so War Wolf was born. Little time past between the spawning of the band and heading into the studio. But instead of just cranking out the typical rushed demo down at the local studio, the trio pissed off to Canada. Bit of an unprecedented move I know, but not without reason, as good friend and Yoda like recording master Nick Kinnish moved there a few years back. Not a house hold name I grant you, and certainly a hell of a way to travel but Nick's catalog of work at the mixing desk with the likes of Architects, Throats, Johnny Truant and of course Dopefight really speaks for itself.
So with the quality of the final production pretty much a sure thing, what exactly can you expect from War Wolf? Well, if you're waiting for Dopefight 2.0 then, I'm sorry to burst your bubble. A safer bet would be to expect a series of sonic bursts consisting of both classic rock and post punk inspired riffage all accompanied with a health dose of angered roaring and Ant's awesome ferocious drumming. Totalling less than 15 minutes the album kind of reminds me of Agoraphobic Nosebleed's side of The Poacher Diaries but slightly less... clinical? Keeping that fine balance of catchy guitars, gut wrenching vocals, occasional machine gun like drum beats and a smattering of samples, then wrapped up and presented to you with all the subtlety of a shotgun blast to the face.
The long and short of it is, if you've ever had even a passing interest in the mixture of hardcore and sludge then this is gonna be right up your alley. Whats more, Headless Guru Records are going to be pressing it on lovely 10" in February, so keep your eyes peeled for that!
~ Jay

For Fans Of; Trap Them, Iron Witch, Grime, Swarm Of Spheres, Starve