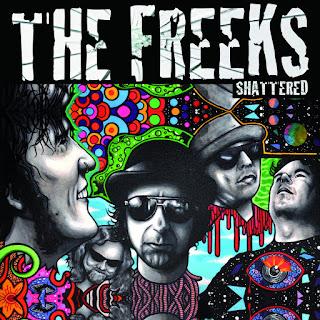 Here for our enjoyment this week is the latest album from the five-piece group of The Freeks, and as it's the band's third album in almost a decade of tenure, you can't accuse them of rushing things.  So what are they up to on Shattered?  Punky psychedelic rock, that's what, with plenty of feedback, neck-popping drum rhythms, growl/howl vocals, thick riffs, and balls-out energy.
Right from the first track, "Tiny Pieces", The Freeks are bouncing and shaking, though they settle down into more of an acid blues groove in the follow-up of "Where Did You Go", and keep their style moving and shifting like that for the rest of the songs.  There's something to be had for fans of '70s psych rock, something for those who prefer the faster stuff of today, something for blues rockers, hard rockers, and deconstructed punks.  And who knows, each of those might find enough to groove on in the other songs to pull them into trying out some genre they haven't explored before.
Put short, it's a fun album.  Put a bit longer, it's an album which wears its energy and enthusiasm not just on its sleeve, but all over its clothes, face, and hair.  And while they fit in enough slower trips to not wear themselves and the listeners out too quickly, that energy is so pervasive, it's hard to come away from listening to the songs without having that liveliness dominate your impressions.  Check it out if you have a taste for rock that rocks without limiting itself to painting by the traditional numbers.
~ Gabriel

For Fans Of;    Blue Cheer, The GTVs, The Heavy Co., The Human Instinct, JPT Scare Band