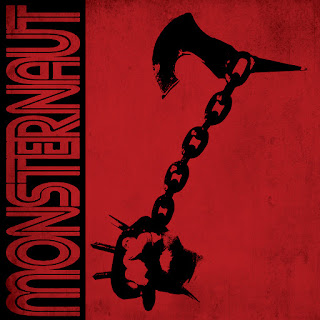 Coming to us from the ever-solid Heavy Psych Sounds label, Monsternaut's self-titled debut album introduces this Finnish group with a collection of two recording batchess, spanning back to 2012, and each self-released by the band with the title Monsternaut.  Working as a three-piece (b,g&v,d), they've got an easy-going hard rock style spruced up with some stoner rock touches.
That adds up to nicely dirty-sounding guitar with a little rough buzz on its edges, thick bass that doesn't get tied down into slower tempos, solid backing from the drums, and vocals with a little sneer to them when not yelling out for action.  On the down-side (and this may just be due to the bunching up recording in the two years that was handled), it's kind of striking how similar the songs are to each other, with one practically picking up the same riffing rhythm that the last one just finished using.
That streak of similarity kind of gets shaken off by the time they hit the fifth track, "Black Horizon", but as that's already halfway through the album, it's not enough to lift the average back up to where it should be.  Oddly, the newer batch of stuff comes first on the album, so it's the lder tuff that shows more flexibility in stle and playing.
Taken as a (very well-produced) demo collection, rather than a full-fledged LP, you can still have some fun with this, to be sure.  Just don't head into it expecting to hear a band at the top of their game; instead, take it as the band trying to entice you to stick around and hear what else they've got in store.  Given that they do show some nice chops, interplay of instruments, and a firm grasp of where to find the fun in retro rock, you've got a pretty good chance of wanting to hear those oncoming tunes yourself, and having heard this one, you'll have a better sense of how they developed.
~ Gabriel