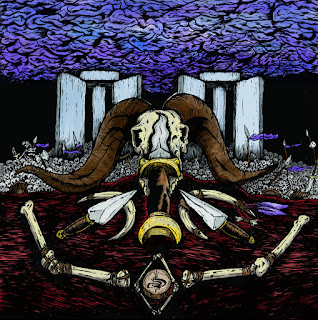 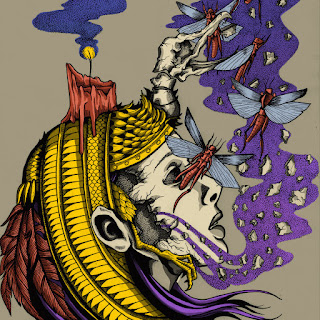 While Shroud Eater has been on our radar, this is the first of their releases we've reviewed, so it's a pleasure to encounter them teamed up with Dead Hand (whom we've covered before, and always enjoyed).  For this split, it's a fairly straight-forward affair, each band getting half a 7" for their song, but they don't put a moment of the format to waste.
Shroud Eater open things up with a thick, rough-edged wave of bass, soon joined by the slow-howl vocals and a big, rolling beat.  Things are kept swampy, teetering somewhere in the overlap of doom metal and sludge, and though it feels a little short for their style at just six minutes, the band manages to pack a sense of extra size into it with the reverb and aggressive chording.
Dead Hand pick up from there, launching into a faster, more venomous brand of doom.  There's touches of both black and death to be heard, but those work more as fuel additives in the doom engine they're running as they roar through the song's valleys and tangles.
Very solid stuff from each band, making this split a great spot to jump in if you're unfamiliar with either band, or both of 'em.  Check it out the next time you're in the mood for a quick shot of doom with nice variety to it.
~ Gabriel