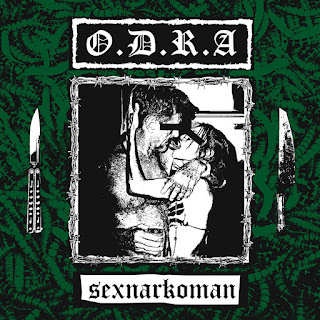 The latest album from O.D.R.A. rumbles into life with metallic groans and acidic feedback, sharp edges popping out with little warning as things shift into gear for the rest of the album.  Pained howls and rebounds of blade-swinging anger shape the vocals, and despite all the fire and brimstone being shot out by the instruments, there's some very well-handled subtle swings of momentum going on under the roars and smoke.  Though O.D.R.A.'s on their fourth album (and I've no idea what their name stands for, sorry), the sense of invention and rawness hanging around the album like a bolt-filled thundercloud is so strong that I'm a little scared to hear the harsh sludge I'm expecting of their earlier catalog, though I know I'll have to after the impression left by this one.
As the album draws to a close, the ~10-minute "Imperator w Latesowych Rękawiczkach" rolls in with a slower pace after the slice'n'dice brutality of the album's bulk has had its way with your ears and soul, and rolls a tank right over what's left of you.  CD copies throw in a fast bone-rattler track as a cap after that, but either way, it's a powerful trip through the songs.  Recommended for those who like their sludge mean and noisy.
~ Gabriel