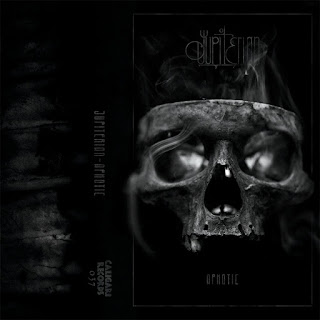 Jupiterian's debut album is doom metal done simply and honestly, letting the low tones and haunted moods carry the music on their substantial charms.  There's a cold funereal atmosphere to all of the songs, but describing Aphotic as just that is to undersell its depth, as the band dips into any sort of doom metal sub-genre you'd care to name.  The expansiveness of cosmic, the thick head-trip of stoner, the charged power of blackened (plus some of its vocal coarseness), and on and on... they draw from it all while keeping their flow steady, strong, and soaked in darkness.  Occasional lances of keening feedback give a nod to sludge, and the progressions call death metal to mind, but it's undeniably doom which guides it all.
As excellent as the music is, I don't feel like there's that much more I can say about it other than 'just listen already!'.  Doom metal fans of any stripe who like things heavy and crushing need to get on this ASAP.  A run of 175 tapes from Caligari Records is currently your only option for physical copies, but if they've sold out by the time you're reading this, get over to Caligari's BandCamp page and do yourself the favor of listening to the streamed version in full.  This is an early Top 20 of 2015 pick, easily.
~ Gabriel