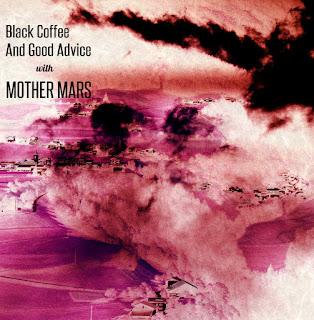 It's been a while since we've heard from Mother Mars, as their last EP (Claimed by the Cloner) popped up back in 2014, and their last full album (Steam Machine Museum) was in 2013.  Happily, they're back in fine form with this new three-track release, brandishing a harmonica and other bluesy touches to their heavy rock style.  The title track is a loose-hanging chunk of friendly bleariness and fat-tubed riffing, done as an instrumental alternate take for the closing song.  In between, "On The Trail (Short Trip)" picks up to higher energy with some hooky grooves, frenzied guitar-work, and spacy beams of energy conveyed by synths and pedals.
At eleven minutes of run-time, it's primed for a 7" release (though they'll need to do the two "Black Coffee"s back-to-back on the same side if they go that route, and as of now, the band says it's digital-only), and a reassuring reminder that Mother Mars have their heavy/psych/space/desert grooves fully intact, with some new tricks to show once their next LP rolls out of the dunes.  Until then, tuck this into your ears and have a good time.
~ Gabriel