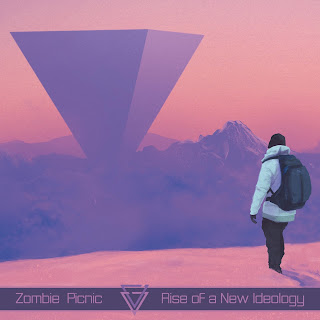 Debuting back in 2016 with their album A Suburb of Earth, Zombie Picnic made quite an impression on us with their free-wheeling strain of prog rock. They're back with their sophomore album now, due for release in March, and with it, the Irish quartet has assembled ~40 minutes of new material, perfectly portioned for the vinyl release it'll receive through Burning Shed.
Things start off in a low-key approach on “Democracy Cannot Survive”, with a gentle melody line cycling about as it finds footing, rising energy and expanding drum flourishes steadily infusing the measures, and the sharp, clear guitar tones wrapping firmly around the whole. The intensity continues escalating from there, with follow-up “They See Science as Dangerous” highlighting the group's ability to tighten up on a riff-ride while bringing all the members into vibrant action, with the bass-lines in particular grabbing listeners by the ear-balls.
Almost half of the album's duration is covered between those first two tracks, and for the rest of it, the songs are served up in more easily digestible form, from the focused drive of “DEFCON” on through to “Anger in Storage (Denial Will Follow)” and its relatively brief outro crash. Concise samples discussing the merits and impact of science fiction, among other societal concerns, are sprinkled throughout the music, and it's from these (and the titling) that the otherwise vocals-eschewing grooves get their thematic flavor. Whether they're really needed is up to the listener to decide, but they do add a nice splash of character (and personally, I'm always in favor of a well-used sample or ten).
Looking at the album as the group's sophomore outing, ZP have certainly managed to grow while holding on to the weird facets that helped make their first so distinctive. Fans of prog rock should go ahead and earmark some money for a copy, and fill the time before release by checking out the group's first album if it managed to slip past them.
~ Gabriel