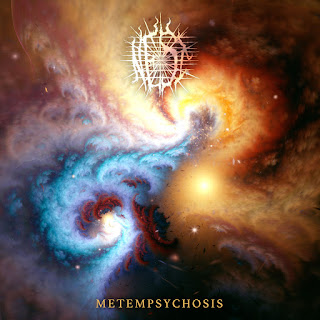 We last heard from NEST about two and a half years ago, with the release of their self-titled debut EP, which made a good impression with its stylish treatment of a blackened doom base.  After a follow-up EP in late 2016, NEST are back again to deliver their first LP, and with its half-hour or so of new songs, the Kentucky-based duo show that they're still in fine form when it comes to crafting concise assaults of weight-laden fury.  Instead of going the route of sheer blow-out screaming and thrashing, they put in the work to build carefully-developed melodies, letting listeners get attached to the tunes before smashing in with bolts of harsh violence, and keep that defiance of easy templates going the whole way.
While they've got a certain distance kept between themselves and rock-out vibes, they do have the ability to tap into those head-banging energies (check out the end section of “Gallows of Forever” for a demonstration).  Again, though, it's a work in contrasts; without the more serious majority of the music, those leaps into more traditional metal vibes wouldn't have the impact they do.  Similarly, their ratio adjustment between the doom and black metal takes them through a nice, wide range of effects and atmospheres, finding just as much room for deep grooves as they do for bone-rattle beatings, not to mention some good old feedback-soaked power drives.  Hell, I actually found myself throwing up the horns while listening (to “Divining by the Entrails of Sheep”, for the record) and I genuinely can't remember the last time a record provoked that response from me.  Even more impressive, they got the whole album recorded in just three days, with the songs' cohesion reflecting that feverish outpouring.
The time NEST have taken to put these songs together has been well-spent, no doubts there, and it's exciting to hear them stretching their style in so many different ways on their first full album.  As with their first EP, they pack in one song which dwarfs the others.  This time, it's penultimate track “Life's Grief” (embedded below), which rolls out to nearly ten minutes of powerful resonance, mixing its huge-sounding majesty with a deep-trenched coat of filthiness, capably covering the album's two extremes (plus the band's more experimental side) while also pounding out some heavy power.  If you're a fan of grisly doom and you're not sold by now, check the full album out once it drops, and let that take you the rest of the way.
~ Gabriel