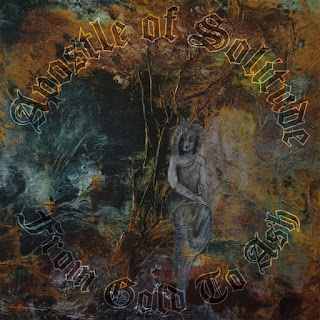 Returning three years after their last album, Apostle of Solitude have assembled forty-five minutes of new material for their fourth solo LP, due out February 23rd, working big riffs and heavy atmosphere to nice effect.  It's doom with some force behind it, and as the band moves along through the seven tracks, they balance the slabby bass-lines with emotive vocals, drums both thunderous and gentle, and some fierce guitar-work.  Almost all the songs break the 6-minute mark, so you get to hear the band build some big structures and give them thorough exploration, all the while using some lush production to bring out the finer details in the resonating chords.
The band also maintains a strong sense of character and consistent tone through the songs, without falling into monotonous drudgery or predictable tricks.  It's an album that really hits the feel of being conceived and executed in one fruitful go of it, while still fitting into the larger scope of the band's full catalog.  Closing out on the funereal “Grey Farewell”, the band shows that they've developed the important quality of restraint with their doom, letting sparseness and simplicity have their place without being buried under tons of fuzz or over-amped bass wallows.  By emphasizing the role of well-made melodies in the style, AoS give promise that there's more ideas yet to be shared from their group, and that they'll be given the time and growth they need to come out smashing.
~ Gabriel

For Fans Of; Below, Earthshine, The Fateful Hour, Of Spire & Throne, Pilgrim