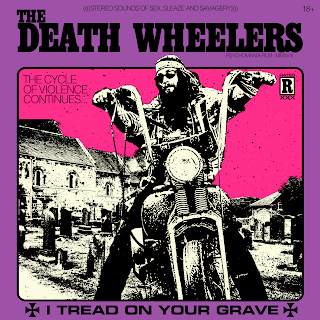 The last time we featured the Death Wheelers here on TBB was back in 2016, when we checked out their split with Witchstone on Sunmask Records. With this new album, the Wheelers are popping up on RidingEasy Records, a name which should be pretty familiar to regular readers, and the Canadian crew have put together eleven cuts of dirty, doomy rock, feeling like a strong blend of several '70s staples. From the sex-hunting hard rock to biker panic films (and their soundtracks), on through the early days of heavy metal and emergent atomic nihilism, hearing the songs of this album is like having a dope 'n' whiskey cocktail poured in your ear through a black denim funnel.
Is there fuzz? Yeah, and plenty of it, but behind that, the band is pushing riffs so fast you almost won't register how hooky they are until you catch your head bobbing right along to the bass slams, hi-hat rides, and hard drum fills. Scatter in a nice selection of samples presumably pulled from favorite films of the group (plus that old hoot, Rock: It's Your Decision), and you've got a solid bout of heavy rock set to soundtrack your next smoke session. And if the mood takes you, you can even try to piece together the story told over the course of the tracks, which involves undead bikers, cross-country riding, and plenty of debauchery. If that all sounds good to you, mark May 11th on your calendar as a day to have some spare cash set aside to pick up your own copy, or go ahead and pre-order one at the Wheelers' BandCamp.
~ Gabriel