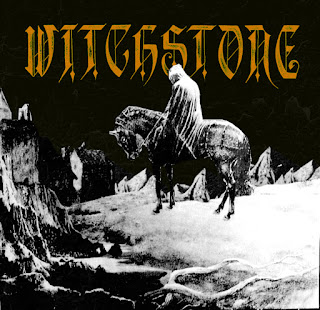 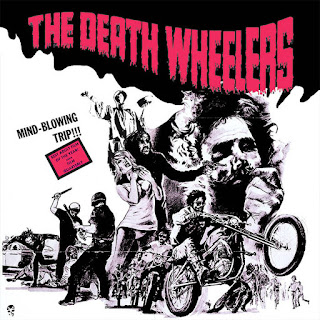 Coming to us from the superb Sunmask Records, this split unites two distinct Canadian bands with penchants for heaviness and stylized madness.  Witchstone take the first half, running two ~10-minute songs, while The Death Wheelers slice their section into smaller tracks.
"The Sludgelands" is the first of Witchstone's offerings, starting things off with a wail of feedback before slamming into the heavy with low-tuned strings and drums ready to bash some skulls inwards, deploying the dirty vocals once the thick stony atmosphere is well-established.  After diving through the filthy doom of that one, it's on into "Altar Riot", a more riff-driven piece with the grimy tones intact for the procession of heavy strains and nasty ear-worms as the energy goes wild.
Over on The Death Wheelers' side, they kick off with a sample from (what I think is) Psychomania, a film with a clear influence on the band's image of undead bikers.  From there, it's a ride through stoner doom cranked up to burning levels, with a few more choice samples adding their character to the instrumental tangles of notes and percussion which make up their cool stretch of songs.  Ending on "Cycling for Satan", which hurtles through the riffs and chunky bass-lines like they're heading back to Hell, the band smashes with style off into the horizon.
Between the two bands, it's a great split, with each getting to show-case their style while forming an effective counter-point to the other; Witchstone does it big and twisty, The Death Wheelers fire off like a rocket.  Both sides have a lot going for them, and in the end, it's just a blast to hear such damn fine music getting played (and you better crank up your speakers to do it).  Vinyl's getting regional distribution (War On Music for Canada, RidingEasy Records for the USA, Hevisike for the UK, and Totem Cat Records for Europe at large), with a limited run of cassettes for those who need it.  Either way, do yourself a favor and check these groups out.
~ Gabriel