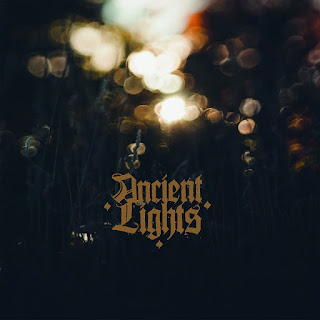 With their self-titled debut album, the three-piece of Ancient Lights (bringing together members of 5ive, Ramesses, and Switchblade) showcase their heaviness through almost ninety minutes of powerfully atmospheric doom. Primarily instrumental, and operating mainly off of the guitar/bass/drums foundation, the songs tend towards forms of slow build-up and gradual erosion around central riffs, with tone and technique savoring providing the bulk of the enjoyment. Lances of guitar feedback and slams of crashing bass augmented by cymbal clangs, slow plows of string reverberation and counter-play, and keening wails coaxed from the instruments are plied into a massive set of slabs, the sort of thing to let play while you get more and more dazed on your substance of choice, or just the music alone.
Judging the overall flow of the album is difficult, not just because of its sheer size, or the semi-hypnotic effect of the music, but also because it drifts along with such ungrounded freedom that remembering whether a given chord strain went to this track or that is like trying to sift out specific grains of sand from a wall-sized dune. It's enjoyable, no doubt, and powerful to boot, but it really is the sort of album to have to spend some time with to just to be able to confidently pick out distinct portions and hold them in mind. Are those really recurring progressions, or have I slipped into a daze? That sort of thing. If you can dig channelings of pretty potent doom into almost entirely instrumental beams, don't miss out on this album. It's due out July 6th, so mark your calendar and prepare your ears.
~ Gabriel