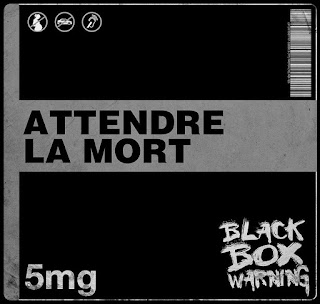 Hailing from France, the sludge three-piece of Black Box Warning makes their debut with this five-track EP, which features different dosage increments (e.g., “4 mg”, “2 mg”) for each of the track titles. Kicking off with “5 mg”, the group swings out a heavy bass presence before laying in the raw-sounding belts of growling and gnarled guitar. Tight handling of the riffs and concentrated spikes of impact show the band keeping their song focused on harsh but controlled delivery, and they keep that up with the tracks which follow, unfolding a set of dirty lungers while spine-tingling tone disruption and generally grimy atmosphere fill in the space between wrathful outbursts.
Though it all comes off as something you'll have heard before if you've listened to more than a handful of sludge albums, BBW pulls it off with earnest commitment and solid handling of the nuances, bringing a liveliness to the down'n'dirty maneuverings that helps lend believability to the usual misanthropic posturing that goes with the genre. It sounds mean, which is a big chunk of making sludge work to begin with, so as long as they keep that up while developing stuff like more memorable riff-hooks on their follow-ups, they should be well-poised to deliver even filthier barrels of bass and rage.
~ Gabriel