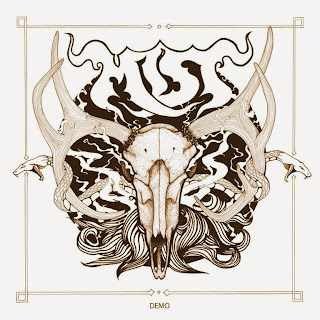 The Slovenian doom band Mist makes its debut with this demo, which includes the tracks Phobia and The Living Dead, nicely concreting their sense of history as they step into the ring. It's a five-member band, with Nina Spruk on vocals, Ema Babošek providing rhythm guitar and backing vocals, Nina Grizonič handling lead guitar, Neža Pečan on bass, and Mihaela Žitko working the drums. The five doomers do a great job of blending early heavy metal with some of modern doom metal's sensibilities, providing a nice atmosphere of creeping occult dangers while tasty riffs are pulled out left and right, and they also have some excellent chemistry between their individual parts. Though it's a demo, they've gone to the effort of cleaning out any crackles, and there's a pleasingly warm tone to the overall sound, as though their amps have had plenty of chords poured through them before these sessions. If this is their rough draft, their full album will be something mighty indeed. Keep your ears tuned to Slovenia (and us!) for further heaviness from these five points of darkened light.
~ Gabriel