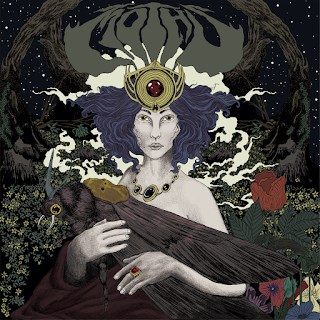 Coming to us from Puerto Rico, the debut EP from the five-piece band of Moths shows the group operating with a blend of heavy rock, stoner metal, and prog, with songs that wind through twisty changes in melodies, time signatures, and tempos.  Kept largely on the heavy end, Moths also find room for some tasty keyboard action, and the occasionally grungy guitar treatments bring a casual liveliness to balance the rumbling bass presence.   The frequent change-ups show a lot of ideas at work, and the success with which they're brought together in song after song has me excited to hear the layers of action the band would create in the space of a full album.  Beyond their snazzy riffs and knack for flipping one groove right into another, the band shows glints of hard aggression which further set them apart from the retro worship of the heavy rock masses.  Throw in a King Crimson cover (of “21st Century Schizoid Man”), and you've got an EP which demonstrates the band's abilities across a wide swath of styles, gives a nod to their influences, plays some kick-ass music in the process, and leaves listeners eager for more.  The EP will officially drop on November 2nd, so mark your calendar and make sure to grab yourself a copy.
~ Gabriel