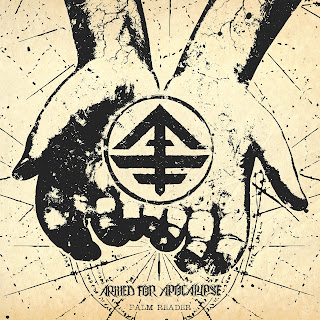 Returning with their first release since 2013's The Road Will End, Armed For Apocalypse have brought four new tracks to bear. The new EP opens with “Mass Oblation”, a hard-slamming cascade of drums, bass, and howls, rumbling from one furious break-out to the next. “Worlds Beneath” follows, with hardcore beat rhythms fused to grinding breakdowns, strains of feedback, and more intense vocals. From there, they launch into “Forced to an End”, the EP's longest track at four minutes and change, rolling out a nimble bass-line to match the swerving drumming and gnarly guitar. The instrumental stretches allow for some extra madness to creep in, from the near-sizzle of the guitar sliding through the jagged bass to the growing sense of pressure, with the draining drop-out leading neatly to the finisher. The title track jumps right into more pounding beats, and doesn't let up for more than a few moments before reaching the final finish. With the four tracks averaging out to three and a half minutes each, things certainly move fast, but with the spirit and energy the band is unloading, that's as it should be. Whether you've been waiting for this since 2013, or you're just looking for some hard sludge action to satisfy your cravings, this quarter-hour slice should do you right.
~ Gabriel

Armed for Apocalypse - Worlds Beneath (320 kbps)