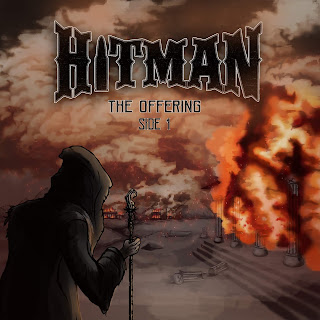 Coming at us from Nova Scotia, the quartet of Hitman have resurfaced with their third EP, following a single back in April of this year. Wasting no time, the EP launches off with “Curtain Call”, a two-minute burner of hard stoner rock, which lays down hard riffs while clearly establishing the style used by the rest of the songs. “Under the Weight” pumps up to five minutes and change, shifting to a slightly slower groove that still bristles with spiky guitar while flexing its bass muscle. Thanks to the extra run-time, the drums and guitar get some more room to shine, with a few breaks and a solo or two indulging in some gritty swagger.
They keep a good swing going through a honky-tonkish bit of cowbell counter-point, then flip right on into “Nero”, the EP's advance single. Here, the edge is rougher, the grooves harder, and the soloing wilder, all of it making clear why this track was picked to stand on its own and pique interest. Lastly, the double-header of “Enchanted Wizard / Hail the Outro” brings things to a finish on the back of big bass slams and some of the EP's sharpest guitar solo work, brandishing a fistful of flair while cranking out the attitude. A well-rounded set of tracks, with plenty of hooky little moments to lodge in the ears and memory, this batch of tunes should have fans well satisfied while drawing in a good crowd of new listeners to hear what they'll come up with next.
~ Gabriel