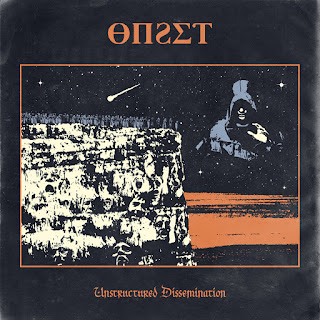 Making their debut with this two-track, ~30-minute EP, the Singaporean duo of ӨПƧΣƬ (which I'm just going to call Onset for the rest of this write-up, for simplicity's sake) bring a deep emphasis on atmosphere to their music, threading in each development and additional element with careful deliberation. The basis is one of doom, leaning towards funereal emotionality but bringing enough hard edge in its twists to keep from sinking into navel-gazing introversion. There's some death metal flavoring at times, some post-metal, traces of symphonic majesty, and other flavors besides, all managed by the band with exceptional form in light of the EP's allegedly live recording (don't ask how one guy plays both drums and bass in that situation).
The 'live' performance also makes it easier to forgive the groove rut into which the second song settles and has a hard time getting itself back out of, but on the whole, it's a very stylish and impressive debut. Though originally self-released on BandCamp back in April, the EP's been picked up for a CD release on November 28th by the Japanese label of Weird Truth Productions. Check it out if you dig exploratory doom journeys, and definitely keep your ears up for more from this group.
~ Gabriel