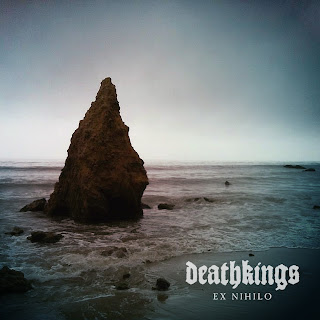 With their first release since 2016, the California-based group of Deathkings has adjusted their line-up from a quartet to a trio, dropping a guitarist and swapping out their drummer (though, in an odd twist, the new drummer has the same initials as the old one). With this two-track EP, the band brings a quarter-hour of sludge-crusted doom into being, opening with “Absolution”, a cruising crusher which angrily mourns the state of life. Breaks into slow-pulse bass throbbing and a mournful atmosphere of distant cries build up the tension and mood nicely, while the ramp back into powerful chords and assertive vocals mixes just enough roughness into its smooth ascent.
“Celestial Birds”, the B-side, runs about two minutes shorter, but makes up for that reduced time with increased aggression and raspiness. Mixing the drums to sound a little submerged brings some great low-end punch to their percussion, while the guitar twists its way through the measures with a serpentine mixture of grace and threat. Mean but stylish, heavy and focused, the song fuses its contradictions into something compelling and near-groovy, though it keeps enough dirt in the flavoring to ward off any accusations of compromise. Quite a strong pair, with each song showing off capabilities unaddressed by the other, and showing a band with plenty of fuel left in its tank after making their pit stop for realignment. Scheduled for independent release by the band on December 7th, this is one you should be sure to pick up and savor.
~ Gabriel