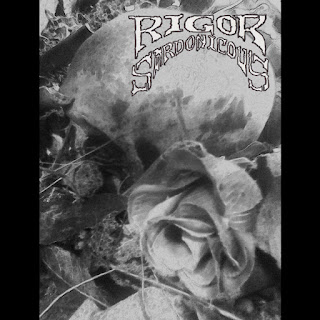 Though it's been six years since their last album, the long-running Rigor Sardonicous are back with a new EP as they approach the quarter-century mark for their first release. Ridenti Mortuus features half an hour of seeping funeral doom, divided between four tracks. Leading with “The Smiling Dead”, a chilly atmosphere of ragged guitar, booming drums, and voluminous bass presence is established with low-key flair, and the instrumental dread creeps on with heavy pressure for its full ~9-minute run. Some vocals are present, but as a low-pitched growl, wedged deep in the mix, they come off as extra atmospherics, instead of trying to overwhelm the slabby circling doom riff.
“The Hound” picks up after the first song fades into silence, bringing the vocals to higher prominence while also introducing some slow-ring cymbal action. Some shifts in other specifics are used, but for the most part, it's more of the heavy doom grind, keeping the slow flow going while the bass thrums out of your speakers. “The Unsepulchred Dead”, at five minutes, is the EP's shortest track, and it steps up the tempo slightly, while keeping the weight and gloom firmly in place while brandishing the guitar buzz a bit more.
Lastly, “Intereo Parum Infantia” comes along to close things out with twelve minutes of further crushing, and with the expanded time, the band finds more room for bridges and incidental touches, letting the sprawling song take on more personality. The way the guitar springs to life for the lead-out riff is a particularly nice touch, serving to break the spell of slow pressure built by the rest of the EP. Something to keep you grim through those long winter nights, this will be releasing on November 11th, though you can go ahead and pre-order your copy through Rigor Sardonicous' BandCamp. Since it's digital-only so far, that's probably your best option, unless you've got a thing for being real punctual with your purchases.
~ Gabriel