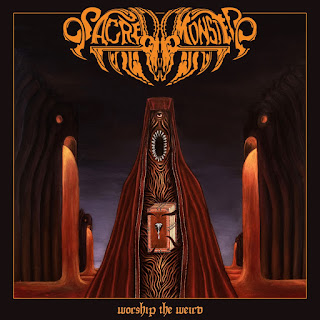 We last heard from Sacred Monster back in the days of 2015, with the two tracks of their sophomore EP, Monster Double Feature. Nearly a decade into the band's tenure, they're releasing their first full album, bearing eight tracks fusing groovy heavy metal with a broad range of horror influences and black/death metal-styled vocals. The riffs are fun and lively, the spikes of embellishment done with high style (check out the harmonized peaking in “The Wraith” when you get a chance), the rhythms both solid and fluid, and it's clear that the band had fun devising the assorted ways of communicating horror flavors and occurrences in musical form.
The melodic flavor of “Waverly Hills” (one of the tracks based on a horror story of the band's own devising) brings Ghost to mind, to an extent, but for the most part, it's hard to pull comparisons to other bands for the songs. You might think 'Oh, there's some Motorhead,' or 'That feels kind of Quiet Riot-ish,' but outside of the band leaning more towards '80s heavy metal than the more occult-flavored '70s groups, their influences seem too diverse to pin down. The guitar-work leads most of the songs, and the guitarist does a great job of coming up with ways to keep the character and approaches of his role fresh, going from bluesy to thrashy to old-school heavy metal on a dime. The rest of the band meshes into it superbly, ramping up and toning down as the tone demands, and the band as a whole does a great job of keeping consistent character going without tiring it out by riding one atmosphere through the full album. The full thing drops on March 1st, with digital, CD, and T-shirt versions available, so be sure to check it out if you've been looking for some hard-rocking metal with a nice splash of variety to it.
~ Gabriel

For Fans Of; Below, Dr. Living Dead!, Lordi, Merlin, Pilgrim