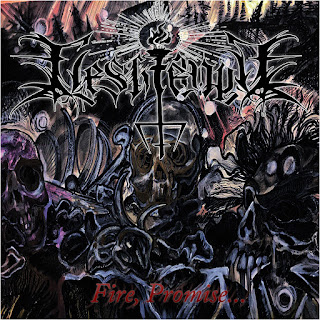 Making a solo debut with this EP, though the band was allegedly formed six years ago, Flesh Temple offer up three tracks of death-styled doom with a blackened rough edge. Leading with “Conduit”, a slow-burn menacer of rising anger, the EP brings a good amount of atmospherics to the table, and mixes its stylistic cocktail with an impressively slick fusion of the elements. The doom generally has the dominant position, with bass-lines chugging away, while the death metal inclinations of the guitar tend to find their volume down-mixed for easier meshing, though it gets pushed back up for some solo action. The black metal flavoring mostly comes through in the raw buzz of the guitar's tone, though a few portions find the drums kicking up into manic gear and skewing the ratio harder in its favor.
“Tears” slips in with a colder vibe, playing up the blackened doom in mood and song-writing while relegating the death to the drums, and to be honest, that was the balance which worked best, at least to my tastes. It felt big in scope, and resentful, seeming more like reflection on an accepted suffering than an outlash. After a crescendo finish, it's on to the closing title track, with a groaning melody on guitar easing into melancholy focus as the song fleshes out. An atmospheric break towards the end provides a suitably somber intensification, and the fade-out fits as an implicit promise of more to come. Solid stuff, well worth checking out if you've been looking for some wintry tunes.
~ Gabriel

For Fans Of; Alraune, The Sleer, Thergothon, Trees, WarHorse