Having just released their debut album, Tomb of Doom, the Portland-based group of Tar Pit specialize in doom metal with influences both modern and old-school, and the band's way with riffs, atmosphere, and flow made a great impression on us (you can check out our review right here).  The band was kind enough to give us some time and indulge our questions, letting us know the details behind the band's beginnings and where they plan to go from here. 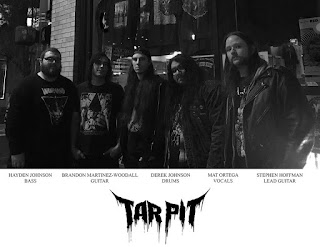 The Burning Beard: Hi there, and thanks for taking the time to do this interview with us!  Why don't we start with a rundown of who's currently in the band? And what are the musical backgrounds for each of you?

Brandon: As of right now, there are just four of us in the band including myself on rhythm guitar, Mathew on vocals, Stephen on lead guitar, and Derek on drums.

As far as my own background in music, I’ve bounced around from multiple bands playing bass and guitar for various projects for the past 10 years. Oddly enough, I don't really listen to a whole lot of doom metal. I tend to listen to a lot of punk/hardcore, “grunge”, and old timey blues along with whatever else I picked up from my dad, step-dad and grandpas.

Mat: My only musical history I have is that I have played alto sax for about eight years, specializing in blues. I only started singing seriously like 4 years ago for this band. But I too tend to listen to more 'grunge' and '70s rock and roll.

Stephen: I’ve mostly played sludge and doom with a bit of punk/hardcore in high school.

TBB: Hayden Johnson amicably departed his position as bassist back in January. What are you looking for in the search to refill that role?

Brandon: Right now we are not in a hurry to find a replacement. It's unfortunate that Hayden ended up leaving the band, especially before the album dropped. All of us are on good terms, though, and Derek and I actually play in another band with Hayden, so we still get to make music together.

I think when the time comes to start searching for a new bassist for this band, we are going to look for someone who is passionate about the style and sound of the band and is able to contribute to the writing process as far as riffs and moving lines. Being able to put up with me is also a plus, haha.

TBB: What was the original 2014 line-up of Tar Pit like? Did that incarnation make it past song-writing/jam sessions to do any live shows?

Brandon: The original version of the band (at least from my point of view) consisted of Derek, Mathew and original guitarist Alex Stanley. I took part in the first few sessions as well, and that's when "Bruja" was written. I ended up leaving to pursue another band and after I left, Hayden joined the band as bassist. The band ended up dissolving shortly after due to secondary bands, and the fact that Tar Pit was originally a side project for various members. No live shows ever happened with that line-up. 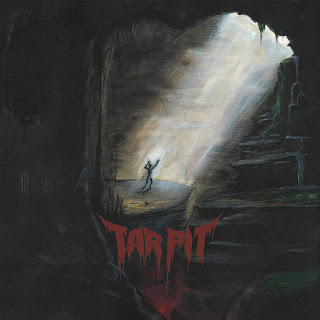 TBB: Riffs are a big part of Tomb of Doom's songs, but the solos make a big impression, too. How hard was it to settle on where to insert those, and what were some of the flavors Stephen Hoffman had in mind when he was constructing the solos?

Brandon: I can't speak for Stephen on behalf of constructing solos, but as far as the arrangement of riffs and where to put leads, I tend to be very vocal about the way I’m hearing the songs in my head and how I would like things to go. I can be pretty annoying to work with, but I’m very picky about how I want things to sound when it comes to the big picture.

Stephen: The reasoning behind where the solos ended up varies depending on the song. Some of the songs pre-dated my time with the band, so there was a certain element of trying to maintain some continuity with earlier demos. In general though, we placed the solos and leads where we thought it would most help break up a riff, and keep things lively, or to elaborate melodically on a particular riff that we wanted to draw out. As for the solos themselves, I try to keep things nice and bluesy, but the occasional minor-key melody or sloppy punk bit will come through.

TBB: What were the song-writing sessions like for Tomb of Doom? Were there any songs that changed significantly as a result of how they handled in live shows? And for those not in the Portland area, how many other songs does Tar Pit have that haven't yet made their way onto studio recordings?

Brandon: The sessions began in early March of 2017, when the band decided to regroup and I stepped in as the guitarist. The first song I wrote was what ended up being "Sauin". Mat and I would get in a room together and I would have him play drums. We would pretty much just drink and hash out ideas and then show them to Derek and Hayden. If they dug it, we worked it out. I used "Bruja" as the template for my writing style when I first joined, and tried to build our sound from there.

"Tomb of Doom" was written shortly after, and at this point we recruited Alex Huston as lead guitarist. We recorded the demo, played a show with Weedeater and Telekinetic Yeti, and then Huston left. We started looking for a new lead player after that, and Stephen filled that spot. Stephen had already written "Rune" for a solo project he was working on and we basically hijacked the song, made some tweaks to it, and made it flow with the other songs already written.

"Capra Nocturnus" was the first song Stephen and I had written together from various riffs he and I had lying around. That song started off a little rough, but I think it came out great once we figured out what direction to take it. We’ve written other songs, but most of those have been dissected and rewritten.

TBB: How would you say the revived line-up of Tar Pit has been received at live shows so far?

Brandon: Live has been great. This is the first band I have personally played with that has gotten to open for bigger acts and actually play in front of a bigger crowd. We don't really book too many shows. We just wait for something we really want to be a part of to come through and try and get an opening slot if so. It's been great and the turnouts are always packed.

TBB: I really dig the cover art for Tomb of Doom, the heavy texturing and use of light do a fantastic job of evoking that subterranean feel. Where did the art come from, and how did you settle on that as the fit for your first album?

Brandon: The art work came from my good friend Joey Rivera. He and I used to play in a grungy type band together and during the few years that we played, I had no idea the dude could paint. He posted some stuff online and Mat had a concept in mind for the album art, so I approached him about it. I think it came out great. The dude really nailed it.

TBB: How would you describe the atmosphere you aimed for with the album's songs?

Brandon: I always tell everyone that I want to write really dark, evil, sludgy sounding stuff with proto elements. So I hope that's what we captured, haha.

TBB: Do you feel like that same atmosphere will stick around for the next album, or are you thinking of going for something different at that point?

Brandon: I think that the next album will reflect the headspace we are in when it is written. It's hard to say, 'This is how it should be,' and then write something under those restrictions. I'm sure it will be similar in style to Tomb of Doom, but more polished, hopefully heavier, and as far as technicality and musicianship, better. 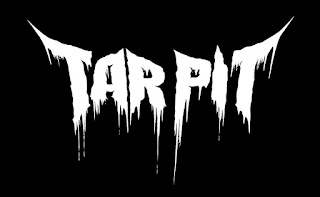 TBB: At this point in time, are you feeling like Tar Pit will head right into another album, or will there maybe be an EP and/or split release before then?

Brandon: I'm thinking a split is our next move, or a two to three song EP. There is definitely zero chance of us doing a full-length this year, especially with Derek and I preparing for our first full-length with our other band.

TBB: In the case of an eventual split or two, are there any particular bands, local or international, that you feel would be a good fit with Tar Pit?

TBB: How do your families feel about Tar Pit?

Brandon: I don't think my family gives a shit. I'm sure they don't understand it and think I need to grow up, haha. Derek's parents, on the other hand, are super supportive, his whole family [is], actually. I don't think they've missed a show yet.

Mat: My family doesn’t really agree with what I’m singing about, haha, but my brother has been really supportive. He’s been to every show and has become our official unofficial photographer.

TBB: You've got cassette copies up for order, digital is a go, and CDs are in the works; any hopes for a vinyl release of Tomb of Doom at this point?

Brandon: If we can find a label to finance it or cough up the cash ourselves, then yes, we will put it out on vinyl.

TBB: Will we be seeing any other Tar Pit merch in the near future?

Brandon: In the very near future.

TBB: Is there anything else you'd like to say to our readers?

Brandon: Snag a copy of the tape while we still have them, and thanks for all the support and positive feedback!

TBB: Thanks for your time and music, and be sure to let us know when your next release is ready to be heard!