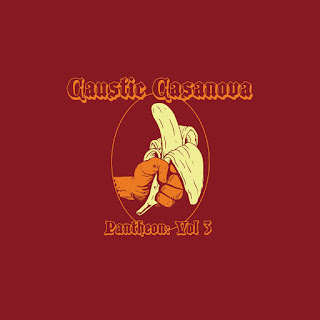 Continuing a series they've been running since 2014, Caustic Casanova pack the A-side of Pantheon: Volume 3 with three songs of their own devising to complement the cover of Weedeater's “God Luck and Good Speed” on the B-side. Leading with “Clown Butter”, the three-piece D.C. group blur together a number of styles, with punk, groove metal, stoner rock, and more evident in the twitchy riffs, funked-out bass-lines, and bumping drum-work. Keeping the track instrumental, the band twists and dips through enough nuttiness to pass as a lost Frank Zappa tune, while continually revving up the energy and pressure.
Carrying on from there with “Everyone's Goddamn Business”, CC shift into a heavier gear, something akin to a proggier cut from Kyuss' Welcome to Sky Valley, though the arrival of the dual vocals put my mind in the neighborhood of Acid King and general-purpose grunge. Carrying plenty of melodic jumps and fake-outs, the song runs through its duration before you can fully grasp everything it's doing, and dives from there right into the last of the EP's originals, “Stampede”. True to its name, the song rides up with a galloping riff and rising speed, pulling you along for the trip with an assortment of hooks and groove mutations.
A bit of banjo and fuzzy bass rumbling sets a suitable opening for the Weedeater cover, and despite the absence of Dixie's distinctive voice, CC do a great job of paying homage to the original while giving it their own coat of style. It's a little friendlier in mood and tone, and not just because of the cleaner vocals (though the growls are certainly present). The strings are a little warmer, the feedback less abrasive, and the guitar less choppy, but it all feels in line with the weird fun of the A-side's contents. Though it all comes together at just about twenty minutes of material, there's a lot to take in across the four tracks, and the band comes out sounding enthusiastic, inventive, and cool. Snag a copy on vinyl or digital; or, if you've got to have things on tape or CD, you can grab a collection of all three Pantheon releases (with an alternate version of “God Luck”) on either of those formats. In any event, do yourself a favor and check this crew out.
~ Gabriel