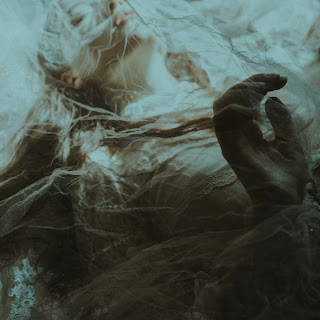 Coming to us from the locale of Portland, Oregon, the latest release from one-man project Folian features four tracks approaching lingering pain and consumptive brooding from an uncommon angle. Mixing low-frequency oscillations, haunted vocals, meticulously-mixed string sparseness, and a bevy of shifting electronic textures, the music of Ache Pillars aims for tangential listening recognition, keeping a thick swaddle of ambiguity to the emotions and structural direction, but prodding out such intriguing combinations of its sounds as to demand an emotional response. Or a physical one, as goosebumps don't seem like an inappropriate reaction to the intersecting layers of reverb and delay banks.
Metal purists will probably be too weirded out or offended by the absence of genre boundaries to really dig the experience, but the near-half-hour ride is one which persistently demonstrates pains-taking efforts to fuse unpredictable emotionality with the unhinged electronics, with quite an impressive result. About half of the EP's run-time goes to the final track, “Where All This Dust Comes From”, which breaks from the momentum built by the preceding tracks' run in order to build its own upwards creep into claustrophobic tension. Something best taken all in one go, but each track shows different facets of musician David Fylstra's exacting technique and enviable creativity.
~ Gabriel