The Progerians - Crush the Wise Men Who Refuse to Submit (2019) 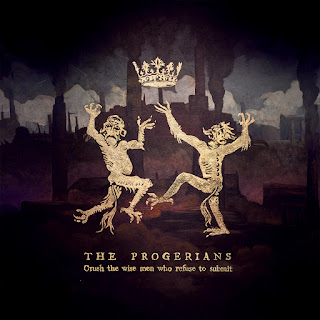 The last time we covered the four-piece group of The Progerians was back in 2013 (geez, time flies), on their split with fellow Belgians OMSQ. Two years after that, they released their first full album, and now, they've returned with their sophomore LP, bearing four vinyl sides' worth of music.
Leading with the curiously-titled “Frankie Leads to Death” (on his way to Hollywood?), the album promptly establishes an evocative atmosphere with thick, rolling bass waves, shifting slowly from one tone pitch to another as a building intrusion of guitar grind hints at the violence in store. Dramatic vocals and synth squealing arrive to further disrupt the drone, before the plowing in of a steady beat shared by drums, guitar, and bass overturns things almost entirely, and the mood shifts to one of stern doom metal. The main riff swings wide and heavy, and the repetitions are given tasty changing inflections of character each go-round, working well to pull listeners in to the flow and make them eager to hear what else will come.
And, with “Destitute”, the album's second track, that hooky momentum picks up into faster, almost thrashy action, chugging out the riffs while the drummer fire off his beats. Hell, there's even some shredding unleashed towards the end, which, when put up against the tone of “Frankie”, serves as a pretty clear indicator to first-time listeners that the band will keep things moving into different territories throughout the album. “Hold Your Cross” shifts the tempo back down, but pulls another surprise with the vocals by flipping over to frenetic French retorts, a structure eventually mimicked by the instruments, and “Oceania” draws in more electronic textures for a creeping sense of wrongness.
With the first song of the second disk, “Crush the Wise Men”, The Progerians provide what could be argued as the most traditionally-styled of the album's songs, though it still brandishes plenty of uncommon edge. While the computer allusions of “Hello World”'s title don't manifest in further electronic nuttiness, there is plenty of guitar torture, and a splash of rawness evocative of sludge or crust punk, so you certainly can't fault them for predictability. Side C's last song, “Graven”, moves back to the sober-faced strain of doom teased by “Frankie”, deploying yet another sturdy riff through twists of percussion and vocal cadences.
On the last side, “Netjeret” brings more of the sludge/punk energy to the fore, which translates nicely into the worn-out come-down of album finisher “Your Manifest”. Across the album's run, the band does a fantastic job of pulling together the disparate styles and moods with a connective thread of persistent energy and attitude. There's ample depth to each song, plenty of details to absorb on revisits of the album, and impressive balance between the band-members. From start to finish, it's an engaging and very respectable piece of work, and fans both new and old will certainly find much to appreciate.
~ Gabriel