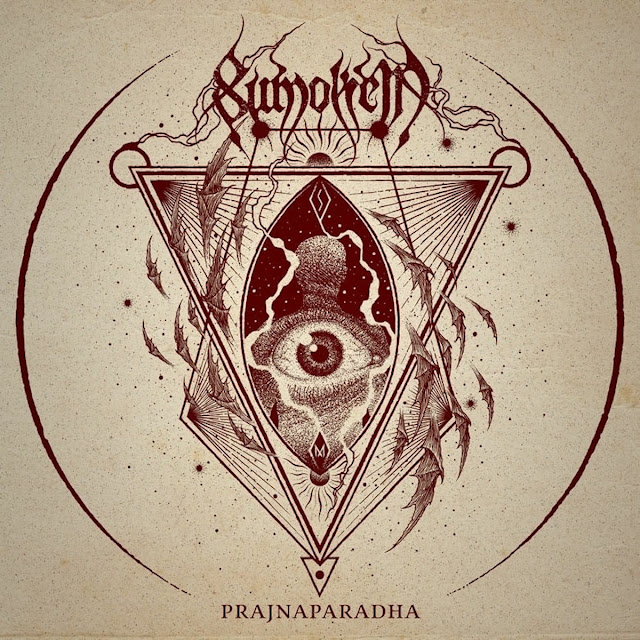 Following up on their advance single for “Fakir” at the start of this year, the Little Rock-based group of Sumokem have released their latest LP, their third since kicking off with The Madness of Lu Shen Ti, Vol. 1 back in 2015. Running slightly under an hour across its six tracks, Prajnaparadha shows the band in great form, putting deep consideration into not just the individual song composition, but also how they fit into and build off of each other.

Leading off with “Prologue” (easily the album's shortest song, at three minutes and change), Sumokem set up a base-line atmosphere of muted choral voices, brooding piano melodics, and deceptively complex percussion. Working through its progressions, the group establishes a sense of deliberation and craftsmanship, which they temper by introducing some rough-edged guitar and bass in the following track, “Nihang”. There's some understated noodling going on here from the guitar, which helps cut the serious tone and keep it from feeling overwrought. Vocals are used with care, tending to a rumbling growl when they appear (though some clean contrast does crop up), and the instruments generally dominate the track. Gnarled and twisting as the song-writing is inclined to be, the hooks bite deep, and pull listeners along with the momentum and beats.

“Parak-Dar” picks up from there, tracing out a similar groove as the end of the preceding song for a bit, before switching to more of a roll-and-stop rhythm, and a number of others after that. A stripped-down break again highlights the group's facility with morose melody foundations, gradually building back up into tension and a bit of a duel between the guitar and bass. The high/low opposition is held onto and developed intriguingly, with the guitar going higher still as the vocals growl deeper, and another twisting passage leads the way to the second half of the album.

With “Sadhu”, Sumokem turn up the headbanging energy, while holding on to their doom/prog cocktail dynamics. They also find room for some lush harmonic interludes, balanced out by some heavy-crunching bass lead runs. “Fakir” (which we've linked below) follows, with some echo pedal lending things further mystic vibes, while the sense of deliberation gets a resurgence in the careful beat deployment. It's a strong pick for the album's lead single, as it gets across a lot of their character, showcases their song-writing skills, and gives a wide range of emotional evocation. Lastly, “Khizer” rides in with a hard riff to keep listeners' heart-rates up 'til the end. It also features more vocal interplay than any of the preceding tracks, and the song's shifting structure makes the final crescendo strike incredibly hard.

All in all, it's an excellent album, putting Sumokem's talents in clear relief with excellent execution. It's also impressive for how cleanly they've set aside the usual metal album preoccupation with finding a particular sub-genre (e.g., stoner doom, tech death, etc.) and diving headlong into it. Instead, Sumokem pull from a wide variety of styles, blending them into their open-eared metal foundation in whatever way will serve the song's growth. It's a song-writing approach that's sadly too infrequently undertaken, but Prajnaparadha is a fantastic demonstration of how well it can pay off. Seekers of ambitious metal, put this one on your list, and pick up a copy when it lands on digital September 4th, and with a vinyl release from Cursed Tongue Records in November.