Devastating Light - I Have Already Failed You (2021) 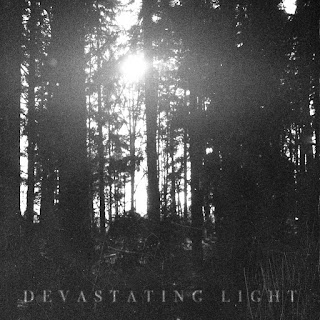 On the debut album from the Finnish band of Devastating Light, the group delivers a concept album mixing doom, sludge, and post-metal styles, built around the story of a man becoming a father, and struggling to exist in the world that surrounds him. Heavy concepts, but the band brings the music up to the level of quality to handle them. Split into three parts (titled, aptly, “Part One”, “Part Two”, and “Part Three”), the album flows with sorrowful grace and a direction to its anger.

“Part One” is almost entirely instrumental, moving from one slow and meditative riff to the next while keeping production and instrumentation pared down to a sharp and chilly minimalism. There's a bit of blackened lo-fi quality to things, with the buzzy strumming of the guitar over the sound of burning leaves, for instance. Despite the apparent simplicity of the melodies, they're emotionally affecting, with subtle twists to their progressions which slip them in even further. As “Part Two” takes over, the vocals arrive in the form of a down-mixed howl, evoking the sense of the singer being buried beneath the weight of the instruments. It works on a narrative level, too, adding another quality by which to be impressed to this debut release. On top of that, it's worth noting here that this is a one-man band, with everything “played, recorded, mixed and mastered by” musician Teemu Toikka.

Following the emotional turns and curves of the music, with its shifts through a wide range of dynamics and techniques, makes this a compelling and harrowing journey, if you're willing to sink yourself into the experience and listen along closely. Fantastic stuff, and an amazing start for the band.