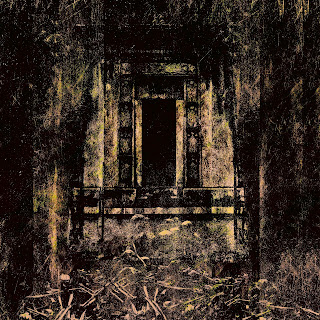 This is the first album from a two-man Dutch supergroup of dark music veterans. Bringing together Maurice De Jong (probably best known for Gnaw Their Tongues, though there's at least a dozen other projects to his name) and Rene Aquarius (likewise prolific, and half of Dead Neanderthals), this is billed as an experiment in pushing the qualities of doom metal to extremes. With the album coming together at just over half an hour in length, it's implicit that to meet that goal, these are going to be some dense songs.

Opening track “Crypt within a Crypt” gets things off to a suitable start, with an enveloping rumble of fuzzy bass joined by low, guttural vocals. The song operates mostly as an audio cocoon, shrouding the listener in morbid ambience, with shredding guitar lines mixed down to become another textural component in the murky din. “Of Suffering” continues in much the same vein, though with some of the textures changed up, and a different rhythm to the massive rumbling. The drums also get more play in this song, though they're suitably muffled, adding to the subterranean feel.

“Suspended Animation” carries on the oppressive atmosphere, with grinding guitar feedback elevated a bit in clarity, and the vocals groaning with more fervor. There's also a shift into what amounts to a bass solo, with clanging piano and drum counterpointing, for one of the more impactful passages in the album. “Sacrificial Chalice” turns up the tempo of the rumbling bass, making it a throbbing presence in the stereo field, and “Cadaverous Odor” brings things to a close with a big riff carrying it along.

While it's not quite as confrontational and unprecedented as the press releases might have it, there's still a lot to respect with the ends to which the duo have pushed this music. It's incredibly heavy, almost to a tangible degree (assuming you've got your speakers turned up loud enough), and the grime is virtually palpable. If you find yourself wanting to just sink into a pit of auditory doom, this should punch your ticket.