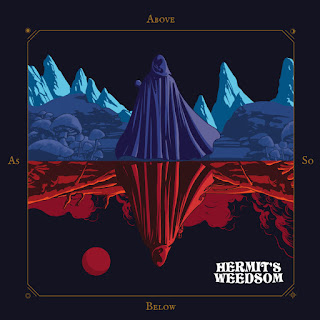 Making their return about half a year after the release of their first album, with a follow-up that's about twice as long as the debut, the French duo of Hermit's Weedsom are clearly aiming high and keeping their momentum up. Coming together at just over an hour across its eight tracks, the album works with an instrumental cocktail of heavy rock and prog metal, with some stoner dabs to keep things warmly casual.

Leading off with “Wheel of Fortune”, the band works a tight groove, spinning it out into elaborations, riding those out, and circling back to the original riff with some new twists to incorporate. Sharp guitar-work and tasty tones mesh well with the hold-it-down and flare-it-up styles of the drums, which pack plenty of punch in the mix. As the band continues through the album, each song gets its own focus and flavor, from the moody sorrow of “End of Cycle” to the inward-spiraling “Broken Chariot”, the craggy menace of “Emperor's Fall”, and on. Not a disappointment to be heard among them, and the band keeps things inventive from start to finish.

The track titles are all nice and evocative, and loaded with Tarot references, complementing the emotive performances of their songs while providing a sense of occult mystery to the whole package. While some may have issues with taking the whole album in one go (the shortest song is just two seconds short of seven minutes), if you've got a spare hour to sit and soak it in, you'll find the time spent to be well rewarded. Here's hoping that some savvy label signs them up for a vinyl release of these tunes; if they do, expect them to be snapped up fast. Even if this doesn't get a vinyl pressing anytime soon, get on over to the BandCamp page and grab yourself a CD or download of the album, and save it for a day when you've got time to savor some excellent music.