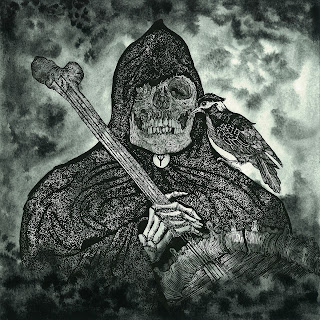 Oh I've been sitting on this for a while, months in fact! Christian was good enough to hit me up with a really early master of the album and as it finally drops on vinyl on 22nd June it's about time it went up. Yup, the chaps are following up their awesome debut Meet The Creature with a vinyl exclusive (at least for the first month) of their new album The Banjo. Courtesy of Bilocation Records, you'll be able to get your grubby little mitts on it via Kozmik Artifactz, so as soon as you get paid at the end of the month head on over!
Right, lets get down to brass tacks, what ya gonna get for your bucks? Same sort of thing as the first release? Well... yes and no. There's that same ferocity for sure, but this time slightly reigned in and coupled with something I can only really describe as post-blues, much like a less aggressive Phil Anselmo side project. A fuzzy blues affair intermixed with elements of classic NOLA acts and a touch of 90 mainstream rock. It's a pretty distinctive sound at the best of times, but when you remember this is coming straight out of Denmark it almost blows your mind. Actually, even more so when you realise that as the album plays out it actually unravels a story with each of the 10 tracks
But not being ones to rest on their laurels and just settle for carving out their own niche, the chaps have actually excelled themselves when it comes to the production and mastering too. With a little help from Jacob Bredahl at Dead Rat Studio they've managed to hit a perfect medium - tight, polished and balanced with a spot on mix of blues and overdrive. Thats really not an easy feat to pull off even by a well established band thats been knocking around for decades. Fingers crossed they've left enough in the tank for a follow up!
If you're a lover of classic power rock, modern heavy blues or just anything with catchy chugging riffs then you really do have to head over and pick up this album, and I'd be quick about it too because I can really see it going the way of Graveyard's Hisingen Blues or The Heavy Eyes self titled album. As soon as word of mouth kicks in the vinyl is going to fly off the shelves and with just 400 copies being pressed (to start with at least) you're really not gonna want to miss out!


For Fans Of; Down, Alice In Chains, Graveyard, The Heavy Eyes, Arenna
Facebook • Myspace