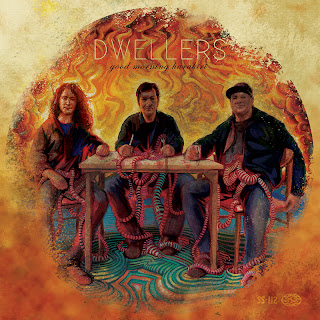 This isn't a sentence you hear everyday but damn, more and more good things just keep flooding out of Salt Lake City. Top Dead Celebrity, Thunder Fist, my good buddies Futzer and Moss Jeff. In fact its the latter there that actually turned me on to these guys. I must admit that I did check out their first release Peace, & Other Offers but it didn't really buzz me. I think it was still somewhat a work in progress, or a foundation kind of EP to build a bigger more detailed sound upon and after just once listen of this new release it's pretty evident it worked. Big time.
Bridging a sort of gap between classic psych and a modern twang of southern rock the album's predominantly a groove laden riff-fest with and underlying drone infused vocal style. I know that kinda comes across as a bit of a back handed compliment but it's not meant to. The vocals are great - a quietly tortured bluesy doom affair, but they do still manage to compliment the more upbeat back drop. That being said the record does slowly crank down the tempo as the seconds tick by. Until you hit the final track Oldhoney where you're met with 10 minutes of churning, haunting and almost doom like composition. It's all a progressive and well timed transition and doesn't knock you for six with any kind of sudden leap, so if you dig both sides of the stoner rock spectrum you'll be pretty pleasantly surprised.
Obviously the best way you could possibly enjoy Dwellers would be on wax, that really goes without saying.  So with that in mind, the good guys over at Small Stone Records have kindly pressed a big fat bunch of them and y'all can go a pick yourself one up here. With just 475 pressed in 3 different colours, they probably wont be around for too long so be quick people!