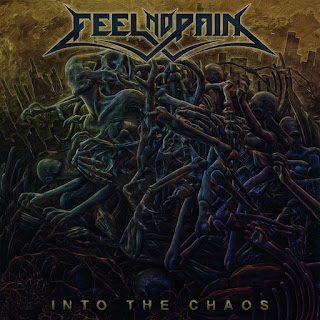 Having changed out half of their line-up last year, following the release of their demo in 2016, the Spanish group of Feel No Pain are naturally still shaping their sound, but from the four songs on this, their first EP, they're shaping up quite well. Leading with the shortest track, “Tower of Silence”, the band gives a taste of atmosphere and drum flourishes, with chanting and croaking bird squawks leading into a doomy but energized vibe. Segueing from there into “Sky Burial”, FNP bursts loose with a blitz of drum and guitar action, firm bass-lines setting the foundation for them to rock out. The riffs are plentiful, but the band is careful not to let them drag on for too long before switching to the next, and the high speed of action gives things a feel not unlike '80s heavy metal infused with some Slayer-like aggression.
“Vanished” brings in some tricky rhythmic play, but settles into its high-speed groove with fine style, rumbling and pounding along while throwing in switch-ups and breaks that provide variety without killing the flow. The solo towards the end gives a great demonstration of the band's shredding capabilities, and the drummer never lets up in giving his part cool intensity. Closing out with “Into the Chaos Dimension”, FNP keep things strongly rocking, firing percussion barrages and striking guitar ragers while bellowing to match. As their first non-demo release, it's a Hell of an impressive one, and should earn them some attention for the hard work and intensity they put into it.
~ Gabriel