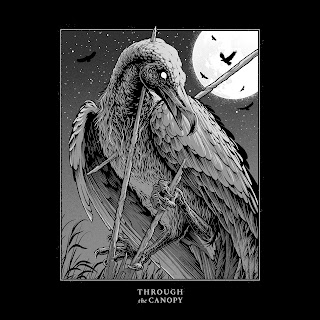 Coming to us from Norway, the three-piece of Through The Canopy are issuing their first EP after a couple years of live gigs and private practice, and the two-track release brings their ambitious mixture of styles to light with fine form.  With each song running over ten minutes, there's more to dig into than the track-list would suggest, and it leads with “Seven Days”, featuring a slow warming build-up into proggy tech work, then more fully into a metallic groove.   The band keeps the song changing again and again from there, with impressive twists keeping the action fluid and high-aiming.  Hints of death metal keep the teeth bared, there's a distinct heaviness to the harder riffs even as they zip along, and some sharp soloing brings power while eschewing cheese.  It's an intricate blend, and for such a lengthy track, it keeps things moving from one focus to the next with such cleverness and vivacity that it never seems to drag.
The other track, “Illusions Lost”, takes a similar tack to the song-writing, but wears a slower and more somber mood for its warping, while also placing more emphasis on allowing listeners to trace the changing of the main melody.  Though it demonstrates the band's abilities with just as much range as the A-side, it presents a much different side to their fusions.  To be honest, this is the one that I expect will really hook ears, despite running a few minutes longer than “Seven Days”, thanks to its firmer groove establishment.   But between the two tracks, there's fantastic work and detailing to spare, leading to an excellent first impression.   The vinyl release of the EP is up for pre-order, so check them out, nab yourself a copy, and keep your ears sharp for their next release.
~ Gabriel

Through the Canopy - Illusions Lost (320 kbps)