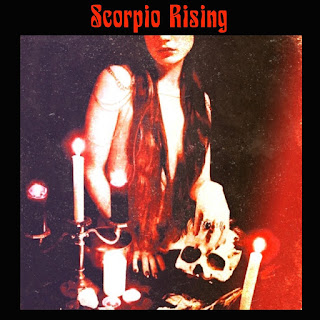 Rising up from the depths of Cincinnati, the one-man doom project of Scorpio Rising has three songs to offer on his self-titled debut demo. Leading with “Black Equinox”, he establishes some old-school doom vibes (think Saint Vitus), with steadily-paced guitar riffs trading off with bass accentuations. Whispered vocals add to the sense of the first track having been recorded in a desolate cathedral, and the song glides out to a quiet fade. “I said it all with that kiss...” takes over from there, with its ~7-minute run-time giving SR an opportunity to show how he handles the long-form doom. A focus on atmosphere serves him well, as the vocals are kept submerged while percussion peaks up through the dirge-like bass grind.
Lastly, “I love you ?” picks things up into a quick-moving haze of garage rock psychedelia, with distorted guitar chords washing over dirty riffs and an almost surf rock-ish percussion line. It's something of an odd finish, but at just a couple minutes long, it works to reinvigorate the listener before sending them off. While there's some expected roughness to the demo, it's still enjoyable, and shows SR bringing his ideas to successful life. Hopefully there'll be more confidence in the vocals on future releases, but as is, it's a nice introduction that does a good job of demonstrating the flavors and skills the band digs.
~ Gabriel

For Fans Of; Abbot, Count Absurdo, Heavydeath, Hypnochron, The Munsens