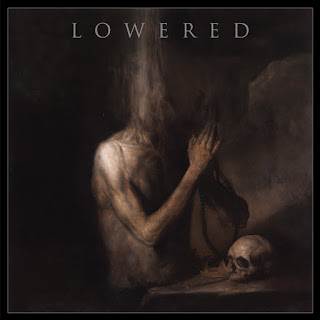 Coming at us from the fertile musical landscape of Portland, Oregon, the debut LP from Lowered brings the group into action with half an hour of black doom metal, emphasis on the black side. Split across four songs, the band gives each piece extensive development, shifting through riffs and rhythms with sharp flexibility while keeping the speeds high enough to get your brains rattling. Melodic progressions are given clear presence in the midst of the slamming, and the breaks into sparser instrumentation are handled with enough deftness to slide them right in without detracting from the songs' flow. The vocals are suitably demonic, with a good balance of rasp and groan, and their fine meshing with the grinding tone of the guitar gives the band an extra notch of distinction to their sound, on top of the impressive flow control they maintain through the lengthy tracks. Though the album was originally released back in February, it's been picked up for vinyl reissue by Throne Records, with regular and deluxe editions available in addition to a few test pressings. Hopefully the band will keep up their momentum and provide a follow-up before too long, but in the meantime, there's plenty to savor here. Something for you fusion fans with a taste for the harder stuff.
~ Gabriel